The Difference Between A Hardware And Software Computers

When you think of a computer, you probably see two parts: the physical components and the software.

The hardware, or parts, provide the computer with data and convert it into human-readable form, while the software is what processes the data and stores it.

Both are vital for a computer’s performance and compatibility. In this article, we’ll cover both the physical components and the interdependence of hardware and software.

The term “compatibility” is often used to describe how well software and hardware are compatible with each other.

Software is a collection of instructions that software developers write and is often developed for a particular operating system.

Since the same hardware is not always compatible with another operating system, there is a requirement that a new version of the software work with the old.

Fortunately, most software companies have already tested their products on various hardware platforms in order to ensure compatibility.

When comparing software applications, compatibility refers to the degree to which two programs or devices are compatible.

Two software applications are compatible if they support the same data formats.

For example, a compatible word processor program will allow you to open documents created on either application.

Another definition of compatibility involves components that can be replaced if they are no longer functional or don’t work properly with one another.

Hardware compatibility lists list devices that are compatible with a particular software program.

The list of compatible hardware is typically maintained by the software developer and/or user community.

The software developer tests the programs and peripherals and creates a list of devices that will work with it.

A user forum can also be used to post questions or requests for testing. If the compatibility list is available on a website, it is likely to be useful to users. 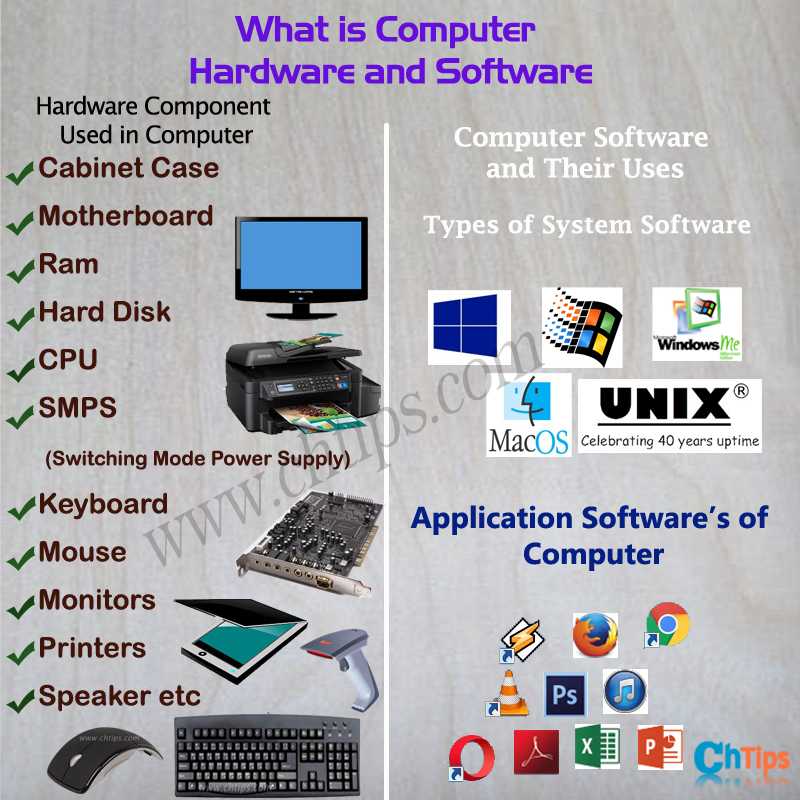 Physical Components Of A Computer.

A computer consists of several hardware and software components.

The monitor is one example of an output device. It shows the information you type on the keyboard or draw on the monitor screen.

Other output devices include the printer and plotter. They are used to print out vector graphics. A speaker is another form of external audio output.

READ ALSO:  How To Turn A Computer Screen Upside Down

And, of course, a keyboard is indispensable to most computer systems. A mouse can be either wired or wireless.

Other computer hardware is made of chips and circuits. The CPU is the main processor, and other hardware components can be located on the computer.

There are other components inside the computer as well, such as memory, storage, and other types of memory.

Listed below are some of the main physical components of a computer. These components can be physically touched and easily replaced if needed.

The main CPU is the most important of all, but the GPU and the RAM are not the only components.

The monitor is the sixth most important component of a computer. Without it, a computer is practically worthless.

A monitor allows you to see any changes that have been made to the computer.

A USB port, meanwhile, is essential for connecting external hard drives and other computer accessories. So, if you want to make the most of your computer, it’s essential to have one.

So, if you want to learn more about the components of a computer, you can read on!

Interdependence Of Hardware And Software.

Hardware and software are two important components of a computer system.

Without one, neither can work. Hardware needs instructions from software in machine-level language, which software then interprets.

The software is installed within the hardware, and functions as a delivery system for software solutions.

While hardware is an essential part of a computer, the interdependence of hardware and software makes it easier to use the computer.

Software is more important than hardware because it is essential to perform basic functions and to respond to input.

Modern hardware is built from both hardware and software. Both parts must work together to produce useful outputs.

Hardware needs software to support it, and software can’t function properly without it. The software works by giving instructions to the hardware, and vice versa.

Without software, the hardware won’t be able to perform any task. Both are expensive to maintain, and there’s no reason to skip it.

However, you can buy replacement hardware in case you find that you need to make a change. You can also replace the hardware with different versions of the same software.

An operating system is a program that controls the functioning of a hardware and software computer.

The kernel manages the access to memory for programs stored in RAM, sets CPU operating states to ensure optimal operation at all times, and organizes data in the form of file systems.

Originally, operating systems supported only one type of file system, which meant they could not support more than one.

Fortunately, computer hardware and software have become more sophisticated and versatile over time.

While hardware provides raw power and functionality, the OS controls the majority of the hardware’s activity.

Without the operating system, no computer would function. Without the OS, the hardware would not be able to interact with one another and with the user.

This is why operating systems have come a long way. They make computers possible, by making it easy for applications to communicate with one another.

In a multi-tasking environment, the OS is also essential. The kernel contains a scheduling program that determines how much time programs should have to run.

It also determines what order programs should execute. The kernel then passes control to the program, allowing it access to the CPU and memory.

The kernel then passes control back to the program through some mechanism. By making sure the right program is running, the computer can handle multiple tasks at once.

This is how the kernel makes sure your applications are not competing with one another for CPU time and memory.

The Hard disk drive is an important part of your computer’s hardware and software. Without a proper space allocation, you will quickly run out of space.

Without enough space, your hard drive may malfunction and your system may slow down. In addition, accumulated data can cause disk fragmentation and other issues.

HDDs are composed of disc-like objects called “platters,” which store data by an electrical charge.

They are read/written using a device called a read/write head that is controlled by software on the CPU and motherboard.

Tracks are formed by sectors and are organized according to a certain pattern. Each sector has a fixed number of bytes.

The read/write head reads each sector and translates it to a binary value. As technology advances, hard disk drive sizes shrink.

READ ALSO:  How To Lock Your Computer

The first drives had storage capacities of 5 MB and cost $50,000 per megabyte. 3.5-inch drives became standard in personal computers.

However, the amount of data stored on a hard disk drive has grown dramatically. From the first drives with a few megabytes of data, today’s hard disks can hold terabytes.

Typically, secondary storage is a component of the computer’s operating system.

It consists of a number of hard disk drives and may also include solid-state NVRAM.

The advantage of secondary storage is its high density and nonvolatility, making it a useful medium for long-term data storage.

Secondary storage devices may be connected to the operating system through a storage area network or configured as a redundant array of independent disks.

Secondary storage is a form of archival storage that stores information long-term, such as records for regulatory compliance or business transactions.

It takes up less space than a breadbox, and it is more secure and reliable than paper. Secondary storage can be either an on-premises backup device or a cloud-based service.

Many organizations use secondary storage to maintain archives of data for years or even indefinitely, as long as the data changes very little.

It is important to understand that the primary storage, the main memory, and the secondary storage are not equivalent.

A computer’s RAM serves as a short-term memory for data and applications that can be read or written while the system is running.

However, a computer with a high RAM capacity can store many more files than one can fit on its main memory.

Finally, we hope you found this article interesting? And what do you think about ”The Difference Between A Hardware And Software Computers!”

How To Zoom In On Your Computer Screen

The Huawei Nova 9 And The Vivo Y21S: Comparison.

The Difference Between Samsung Galaxy S22 And Galaxy S21.

Samsung Galaxy S22: The Most Recent Information And Rumours!

How To Identify Which Songs Is Playing With The Help Of...